In addition to his time with Yes, who plays here Friday, Downes has performed with the Buggles and Asia. 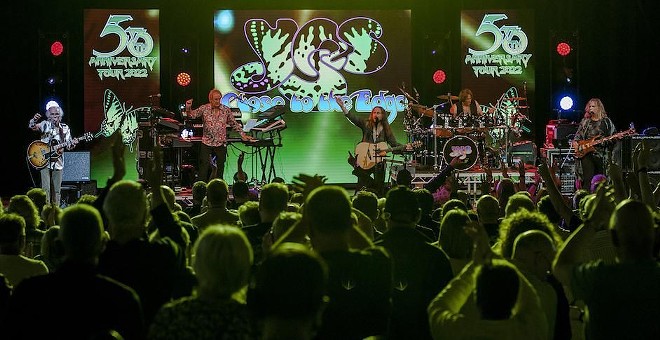 Courtesy Photo / Yes
The current lineup of Yes performs for the 50th anniversary of its album Close to the Edge.
The band Yes has gone down multiple paths on the trek to prog-rock legend status. So has its current keyboardist, Geoff Downes.

Sometimes those paths have converged. At other times, they’ve run parallel.

Downes is part of a fraternity of high-caliber musicians who have woven in and out of Yes for years. He joined for the underappreciated album Drama in 1980. But he has his own story as well, having been a member of pop outfit The Buggles (“Video Killed the Radio Star”) and ’80s prog supergroup Asia.

Yes’ latest lineup, featuring Downes, will perform its 1972 masterpiece Close to the Edge in full at the Aztec Theater on Friday, October 21. The gig will include not just that album but also a selection of cuts from other parts of the group’s career.

We talked to Downes about the challenges of reproducing an album he didn’t originally appear on, the difficulties of getting back on the road after the COVID crisis and the band's decades-spanning history.

The keyboardist spoke to the Current the morning after a concert in Jacksonville, Florida. “I think I’ve played in every single state in America, including the outlying ones like Alaska and Hawaii,” Downes noted in understated British fashion.

What kind of challenges has Yes faced to start touring again after the COVID-19 shutdown?

We lost [longtime drummer] Alan White earlier this year. That was a big blow. He hadn’t been playing that much with the band in the last few years, because he had some quite significant problems with his back. Jay Schellen has been with us for three or four years now, covering the stuff that might have been too much for Alan. Having said that, [White] was a great drummer and a great friend, particularly to me. It was a tough call for everyone in the band because it happened fairly quickly. I remember I was talking to Alan at Christmas, and he seemed fine. He said, “Oh yeah, I’ve got some problems,” but I think the situation took a turn for the worse quite quickly. It was a shock, and I think everyone was wondering how we were going to cope with it. The same way when [longtime bassist] Chris [Squire] died. Everyone wanted the band to continue. Chris did, and I think by the same token, Alan did as well.

The band is doing the complete Close to the Edge album this tour. Yet guitarist Steve Howe is the only current member to appear on that record. Is it challenging for you to learn and perform an album when you weren’t a part of the original writing and recording process?

It’s very difficult in many ways. I have to wear a lot of different hats in Yes. I’ve got to channel Tony Kaye, Patrick Moraz, and obviously, Rick Wakeman. I’ve got a lot of different styles I’m trying to encompass in one show. I find it interesting, as much as it is challenging. I try to get as close as I can to the original sounds, whether it be a Mellotron or a Hammond organ or an acoustic piano, maybe a Moog. All those things that were really the key elements of a lot of the early Yes music. As much as I try to learn the original parts, I’m also very interested in those sounds that they used and what they got out of the fairly limited instruments of the time.

This year marks the 50th anniversary of the original release of Close to the Edge. It’s become fairly common for bands to revisit landmark albums on anniversaries. What makes these kinds of shows so popular with audiences?

People go back and remember when they first heard these albums. It’s really a trip down memory lane. For me, I was a music student when Close to the Edge first came out. It became a significant album for a lot of the students I was with. It was so groundbreaking and a pinnacle album in Yes’s career. People can remember those days, and it brings back those great memories.

You’ve been performing a couple songs from 2021’s The Quest. How has fan reaction been to newer songs? There’s the joke that as soon as a legacy band says, “Here’s one from our latest album,” everyone heads to the restroom.

It’s been really good. We’re not force feeding them with an entire album. That would be not advisable, as you say. If they’re not familiar with it, you can’t really expect them to sit there with open mouths while you perform the whole of your latest effort.

Let’s talk about your first tenure with Yes and Drama. How did you and Trevor Horn join the band?

We had the same management company as Yes. We were in The Buggles at that time. There was a rehearsal studio in London where they would rent out four or five rehearsal rooms in the same complex. We were there writing our second album and Yes were in the next room, the three of them. Steve, Chris and Alan. We got to talking and they said, “Well, if you’ve got any new material, we’d love to hear it, because we haven’t got Jon Anderson and Rick Wakeman anymore.” So, we started working with them and putting together some ideas. They eventually said, “Why don’t we put our resources together and make an album?”

It's been said online that there were Yes gigs where the audience didn’t know in advance that Jon and Rick had been replaced. Is that true?

Not really, no. We went straight from writing the material into the studio. I think the tickets went on sale before it was fully announced that Jon Anderson and Rick Wakeman weren’t there. So that was a surprise to some people when we turned up to Madison Square Garden with two new guys in the band who were known for a famous pop record! The thing is that both Trevor and myself were big Yes fans anyway, and it was almost full circle when we got into the band. Trevor had a bit of a harder time than I had, because Yes had three keyboard players before. But replacing Jon Anderson, who’d been there since day one, was a tough challenge. In hindsight, listening to Drama, I think it’s a strong album. It took Yes in a more modern direction and away from the big sort of ’70s sound that they had. The interest in that had started to turn away by the end of the ’70s. Other things were coming through. The new wave movement. You had punk, which took away a lot of the young people who were interested in music. When Trevor and myself came in, it was kickstarting Yes into a new decade.

That ’70s material is highly celebrated. The ’80s material has its fans — look at the Jon Anderson, Trevor Rabin and Rick Wakeman tour a few years ago. And, of course, the Asia reunions featuring yourself and Steve Howe. But that later material doesn’t have the same sort of exalted status. Why is the modern reaction so different to those eras?

I think the ’70s was very diverse. Genesis didn’t sound like Yes. Yes didn’t sound like King Crimson. ELP sounded like themselves. But it was all under the progressive rock umbrella, even though it wasn’t called progressive rock then. There was a lot of variety, a lot of different styles honed into one. When the ’80s came along, it became more homogenized, in a way. There was a certain sound. A larger-than-life production. Whereas the ’70s was much more just letting the musicians express themselves. The guitar parts, the styles, things like that. I think as the big bands came though, like Foreigner, Styx and Journey, they had — not a formulated sound — but a type of production that people might look at now and say, “That sounds really dated. The ’70s sounds much more modern in some ways.” But music is all about taste. It’s all about how people interpret it themselves.

I agree with what you’re saying about these bands having progressive elements. But it’s almost like they snuck it in. If you wanted to hear “Owner of a Lonely Heart,” as a straight-ahead rock song, it was there. Other songs on Yes’s 1983 LP 90125, like “Changes” and “Hearts,” you don’t have to look for complex prog. It was dense and out front, but you don’t have to appreciate that to enjoy it. But the ’70s material requires an investment and a real appreciation of highly difficult pieces.

I agree. Music became a bit simpler in the ’80s. I don’t think people had the appetite at that point to listen to a Close to the Edgeor whatever. People were looking for a new aspect to music. They’re always looking for new things. That’s what keeps it fresh. I have no problem with that at all. When it came to production, there was a lot more gimmickry. A lot more instant stuff to get people on board. MTV was there as well, so all of this was all connected. Getting an instant appeal with a song. You’ve got an intro for 20 seconds and then bang you’re into the hooks.

Speaking of MTV, The Buggles’ “Video Killed the Radio Star” was the first video ever aired on the channel. The band immediately became the answer to a trivia question.

It wasn’t even a hit in America. I think it peaked at No. 14 on the American chart. A lot of people in America know that song, though. Obviously, it was helped along by the fact that it was the first video on MTV. It was two years after the song had been released. They must have dug it up and said, “Well, that will be a good start.”

In the end, video did kill the radio star. What killed the video star?

I think reality TV, probably. That killed the video star and music! I’m surprised they still call it MTV. It has no relation to how the whole thing started. It went to VH1, and then that led to reality TV. The thing is, we weren’t really meant to be running around on ships and yachts and posing. We were musicians making records. Then the record companies say, “You’re going to do a video.” You can’t just sit around and play your music. It was a sort of weird thing where you get Simon Le Bon on the front of a boat singing, “Her name is Rio.” Musicians weren’t actors. I think that very few crossed the divide. Sting did a certain amount of acting. Phil Collins, maybe. The essence of it was that we started out as musicians, and we weren’t prepared to be goofing around in these videos.

If you were offered a chance to recreate a different classic album with a small number of original members, what would you choose?

Tusk by Fleetwood Mac. Stevie Nicks is my favorite female vocalist. To work with someone like that would be extra special. The album has quite a lot of musicality. People pass on Fleetwood Mac as being commercial or mainstream or whatever you call it. But there’s a lot of depth. That would be the one I’d go for, straightaway.