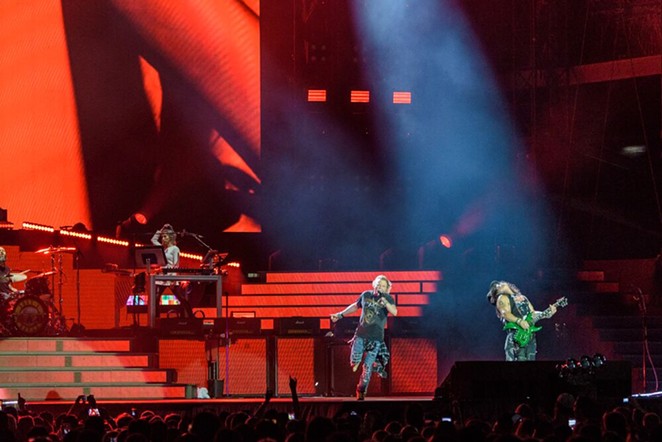 
One of my earliest childhood memories is of me sitting on my older sister’s bed with a Sony Walkman listening to Guns N’ Roses’ “You Could Be Mine," or as I called the song back in the early 1990s, “The Terminator 2 song,” since the video was basically mixed with scenes of the blockbuster hit. Yea, GNR pretty much ruled the rock game through the late '80s and early '90s — with Axl Rose’s signature shuffle and sneering high-pitched vocals paired with Slash’s god-like riffing and iconic top hat, the group were an unstoppable behemoth of sex, drugs and rock ‘n’ roll.


Last Friday night at the Alamodome, the anticipating buzz of seeing these legendary rock gods could be felt like a electric current running through the massive audience who were dressed in mostly GNR shirts, ripped jeans and, of course, red bandanas. 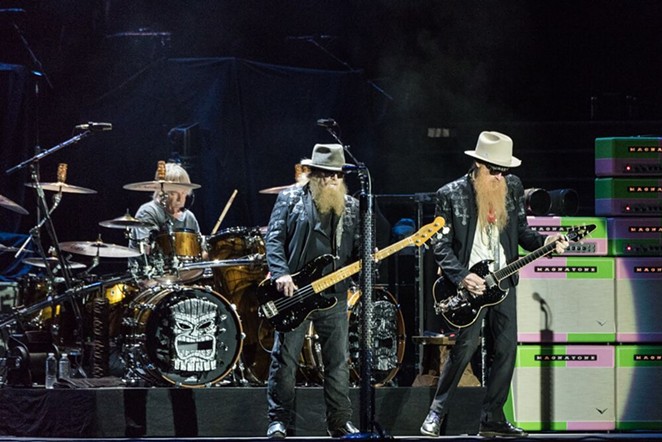 
Opening up the night was ZZ Top, who casually walked onto the stage and went right into “Got Me Under Pressure” off their 1983 album Eliminator. The Houston-based trio who’s lineup hasn’t changed since 1970, took the audience through a whirlwind of their signature boogie rock with songs from their latest album La Futura all the way back to their 1973 record Tres Hombres. Donning leather jackets, sunglasses, hats and sparkly guitar straps (rhyme unintended), bassist Dusty Hill and guitarist Billy Gibbons traded off lead vocals (with a sprinkle of choreography thrown in), for an hour — a perfect opening for a night of rock 'n' roll.


After the trio left the stage and the lights went low, that electric current of anticipation intensified as everyone knew that Axl Rose, Slash, Duff McKagan and the rest of the gang would be bursting out at any moment to seer our faces off with pounding drums, epic electric guitar solos and soaring high vocals.


With a tumultuous roar from the crowd, GNR hit the stage with the reunited lineup of singer Axl Rose, bassist Duff McKagan, and Slash on guitar as the band tore into the second track off of Appetite for Destruction “It’s So Easy.” 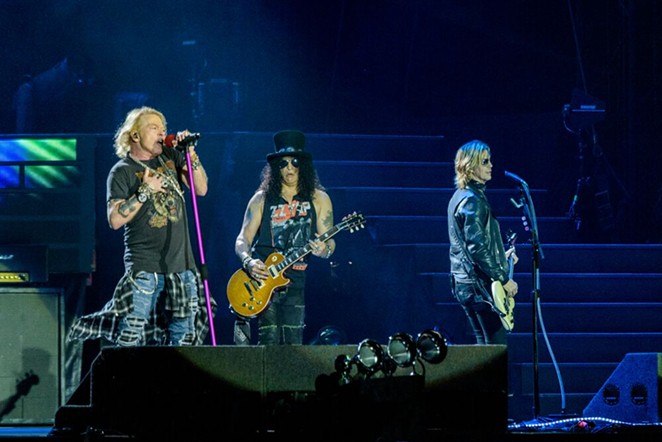 
I have to admit that pining over photos of early '90s Axl Rose before the show probably wasn't my best move. This dude looks rough. And for a now-55-year-old, that’s literally beat the shit out of his body with decades of touring and hard drugs, maybe he didn’t look that bad running back and forth across the massive stage, but he wasn’t quite hitting some of those high notes as well as he used to. And sure, rock ‘n’ roll, hasn’t exactly been about playing your shit perfect or hitting every note – it’s about the attitude and showmanship; still for a band that arguably was the biggest rock act of the late '80s, it was hard not to hear the mistakes (or think about how bored they looked on stage).


Slash, on the other hand, fucking destroyed it. Looking ever-so-cool in his legendary top hat and curly hair, the guitarist really was the big reminder that these dudes were and still are in the game for good reason. The 52-year-old shredder held the band's 3 and a half hour set together with solos that stretched way beyond the original recordings. 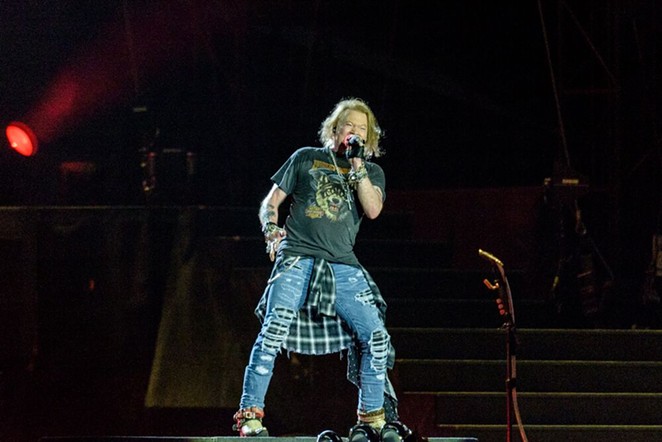 Which, was sort of another thing. I don’t think we needed three and a half hours of Guns N’ Roses. With the amount of random covers like Nino Rota’s “Speak Softly Love (Love Theme From The Godfather)” and “Black Hole Sun” by Soundgarden, I’m pretty sure the majority of the audience would’ve been OK with streamlined hits and a few deep cuts.


And sure, we got “You Could Be Mine,” “November Rain,” and all the songs you definitely wanted to hear, but, in a few moments throughout the show, it almost felt like the band was playing for themselves. 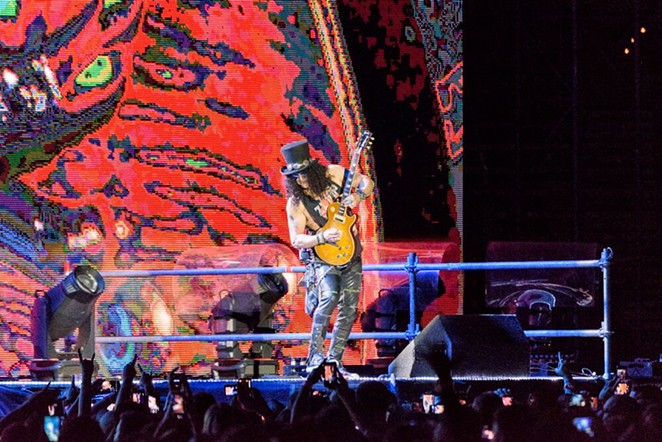 Jaime Monzon
Or maybe it's because Guns N' Roses know that we've been crazy about them since the get-go. A couple years ago, Slash spoke to former Current music editor Enrique Lopetegui

about San Antonio and our appreciation for GNR: "Anytime you go to a city where the fans have a great, deep appreciation for what is going on [onstage], you remember that. There are places where you play in front of an audience and it clicks, but you just don’t feel it as much as in other cities. I played San Antonio probably about a dozen times or more and it’s one of those places where after the first couple of good experiences you look forward to going back to."

All in all, if you were a die hard fan, you certainly got your money’s worth, but it’ll be surprising to see how much longer Rose's vocals can keep up this kind of touring. From someone who’s introduction to rock ‘n’ roll was Guns N’ Roses, walking away from the Alamodome left me feeling stoked for seeing a bucket-list band, but a little disheartened about their performance.