A bevy of heavy bands are headed our way, but so is French Police, which has a modern take on new wave. 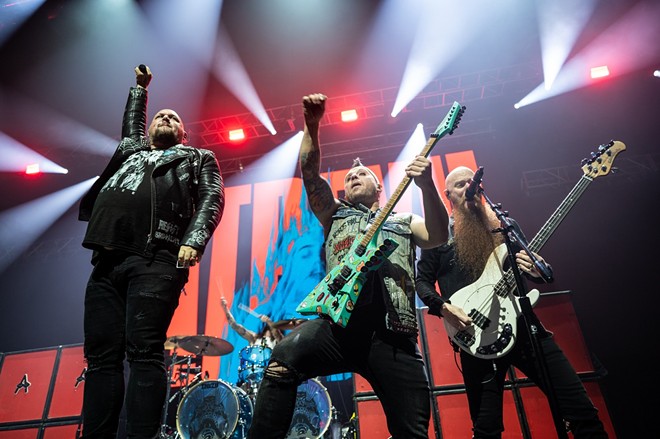 Jaime Monzon
Atreyu opened for Nothing More at the Tech Port Center + Arena earlier this year. Now it's on the bill with Ice Nine Kills and Black Veil Brides.

For some reason, plenty of bands specializing in aggressive sounds are hitting the road in December. Witness the the Ice Nine Kills-Black Veil Brides package tour heading to Tech Port Center + Arena. Or the Paper Tiger show by thrashers D.R.I.

But if it's not ear punishment you crave, psych-pop group Drugdealer and new wave revivalists French Police also have worthwhile Alamo City shows this week. Let's check out the details.

Multi-instrumentalist Michael Collins leads Los Angeles-based psych-pop outfit Drugdealer. If his name sounds familiar, it may be because he's also led groups including Run DMT, Salvia Plath and the R&B duo Silk Rhodes. In 2013, Collins embarked on an effort to created more traditionally formed songs, and after three years of work, Drugdealer released The End of Comedy, which featured cameos from friends including Ariel Pink and members of Weyes Blood. The band's latest release, Hiding in Plain Sight, continues with good-vibes grooves that would sound at home on '70s AM radio. $18-$20, 8 p.m., Paper Tiger, 2410 N. St. Mary's St., papertigersatx.com. — Danny Cervantes

Houston-based thrash pioneers D.R.I. emerged from the 1980s punk scene and later tempered their ultra-fast blasts of anger with enough crunch to appeal to a metal audience. There's been speculation for years now that the band has been working on new material, but with that yet to be seen, San Antonio heshers can still rejoice in hearing their favorite rapid-fire D.R.I. screeds live ahead of the holiday season. $17-$20, 7 p.m., Paper Tiger, 2410 N. St. Mary's St., papertigersatx.com. — Brianna Espinoza

Heavy metal and horror movies go together like cheese and fine wine, so why not combine them into one entity? Ice Nine Kills certainly has. With lyrics derived from favorite horror movies and music that sounds like something from a suspenseful film, the band delivers the whole spooky package. Ice Nine Kills also enhances its stage presence with props and outfits that mimic those of iconic horror villains. The band is on the third iteration of its Trinity of Terror Tour, which includes bands that are known for either wearing all black or all white in their music videos — those being Black Veil Brides and Motionless in White. (We'll let you guess which band dons which hue.) $35.50-$85.50, 6:30 p.m., Tech Port Center + Arena, 3331 General Hudnell Drive, (210) 600-3699, techportcenter.com. — BE