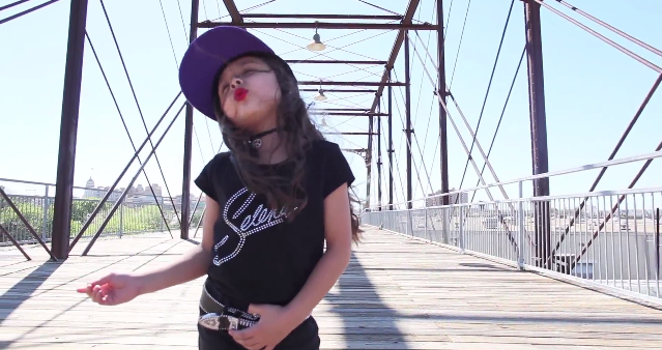 Heartfire Media
In time for Selena Day, local production company Heartfire Media released a tribute video for our beloved late Tejano star Selena Quintanilla-Perez. On this day Selena would have turned 44, and this video celebrates her life through music and dance. It's been 20 years since we've been without her, and the tribute video invokes a sense of catharsis as it let fans and look-a-likes express their love for her by miming the words to her hits.

The video begins with Selena ominously crooning "Como La Flor" as fans begin to twirl their hands and lip syncing at famous landmarks in San Antonio. The video continues to play her hits in a medley with "Bidi Bidi Bom Bom," "La Carcacha", and then eventually it makes it's way to "Fotos y Recuedos" , and just as a disclaimer you will begin to feel all the feels in the world. "Fotos y Recuerdos (Photographs and Memories)" is relevant in this instance because that's one aspect of how we are keeping Selena's legacy alive. The video ends with the even more heartfelt song "Dreaming of you" and all of her fans present in the video holding Selena memorabilia.

This video showcases the impact Selena had in our community. As mentioned before Selena's legacy lives on, and that is very evident with the little children who are present in the video. The loss of our Texan Queen is still like a scab that's never fully healed, but with all the hurt in the world, the people of San Antonio, Heartfire Media, and Producer/Director Samantha Najera, it makes this day a very special and joyous day.