How to get birth control and emergency contraception in Texas

Contraception options are available through most health insurance plans and government-funded clinics. 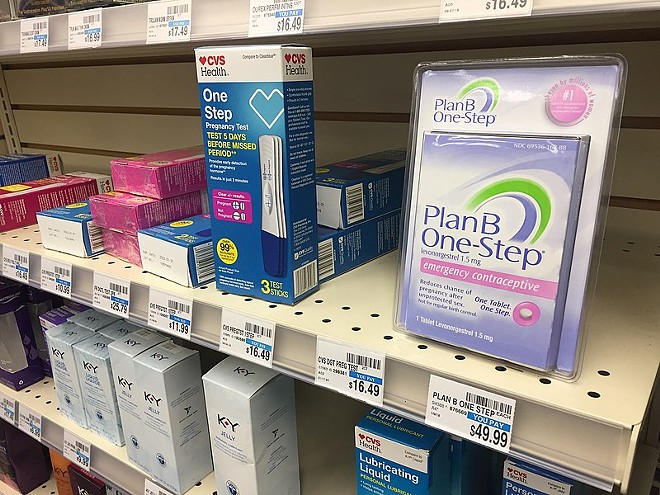 Wikimedia Commons / Sarahmirk
Emergency contraceptives on display at a CVS pharmacy.
Abortion services are coming to an end in Texas, but Texans still have access to a range of birth control and reproductive health care services through most health insurance plans and government-funded programs.

Access and confidentiality vary based on the type of birth control, insurance and whether funding comes from the state or federal government. Here’s a rundown of how you can access birth control, emergency contraception and other services.


Under the Affordable Care Act, most health insurance plans must provide contraception options and family planning counseling at no out-of-pocket cost, according to the U.S. Department of Health and Human Services.

This includes FDA-approved options prescribed by a doctor such as birth control pills, vaginal rings, implants like IUDs, barrier methods, sterilization procedures and emergency contraception like Plan B and Ella. You can learn more about contraception methods here.

However, insurance providers may not cover all contraception options and brands, especially if they are newer.

“Overall, insurers needed to provide at least one method in a specific class of methods,” said Kari White, an associate professor of sociology and social work at the University of Texas at Austin and the lead investigator of the Texas Policy Evaluation Project, which is a collaborative group of researchers who study the impact of contraception and abortion policy in the state.

Insurance providers are also not required to cover abortion-inducing medications or vasectomies for men.

Religious institutions like churches are exempt from the requirement to provide employees with insurance coverage for contraception and family planning counseling, but you may still be able to access free services if your insurance plan is sponsored or arranged by a religious nonprofit such as a hospital or higher education institution. Private companies in which five or fewer people own more than half of the company can also object to covering contraception if it conflicts with the owners’ religious beliefs under a 2014 Supreme Court ruling in favor of retailer Hobby Lobby.

Where can I get birth control if I'm uninsured?


Texas has more uninsured people than any other state, and it’s the largest of a dozen states that have opted to not use additional federal funds to expand Medicaid coverage for low-income people. That left more than half a million Texans in a coverage gap because they earn too much to qualify for Medicaid and too little to afford private health insurance.

If you can’t access insurance through an employer or the federal marketplace, you can get contraception and preventive services at government-funded clinics.

There are more than 175 Title X clinics across Texas, according to Every Body Texas, which oversees the federal grants in the state. The clinics are meant to help teens and people who can’t afford health care, are uninsured or may not have a government-issued identification, but White, of the Texas Policy Evaluation Project, said they are open to anyone.

Services for men and women are provided on a sliding scale, based on income, and may be free for people who fall under federal poverty guidelines, she added. You can find Title X clinics on Every Body Texas’ website.

Under the Healthy Texas Women program, people can access birth control pills and other forms of contraception for free. The program is open to women in Texas between the ages of 15 to 44 years old who are not pregnant, are U.S. citizens or qualified immigrants and meet low-income standards. A single person can earn only up to $2,313 per month to qualify. Women under 18 must apply through a parent or guardian.

The state’s Family Planning Program offers similar free or low-cost services. It is open to men and women in Texas who are 64 or younger and who earn an income of up to 250% of the federal poverty guidelines for their household’s size. This year, the maximum for a household of one person is $33,975.

Under both state-run programs, a person is granted services for a year unless their income or qualification status changes. The person can reapply for benefits if they still meet qualifications.

Some clinics work with both Title X and state funding, so staff there can help you figure out under which program you may be covered, White said.

What if I'm an undocumented immigrant?

Immigrants without legal status can receive care at Title X clinics and may qualify for Texas’ Family Planning Program.

I'm younger than 18? Where can I get birth control without parental consent?


Teens can access contraception without parental consent at Title X clinics and at other approved providers if they have Medicaid. But the nonprofit Jane’s Due Process, which runs a helpline for teen reproductive care, warns Medicaid may send an explanation of benefits or follow-up letter to your address, so it may not be completely confidential.

Texas is one of just two states that does not cover birth control at all — with or without parental consent — on the state-run Children’s Health Insurance Program.

What about Planned Parenthood and other abortion providers?

Texas also bars people from using Medicaid to pay for services outside of abortion, like birth control, at clinics associated with abortion services, such as Planned Parenthood. This also applies to women covered under the Healthy Texas Women program, White said. But it is unclear how this restriction will apply if these providers stop providing abortions, she added. Planned Parenthood of Greater Texas did not immediately respond to a request for comment, but its website still says Texans who rely on Medicaid plans are blocked from seeking care at its health centers.


The restriction does not comply with federal Medicaid guidelines, White said, but Texas spent about a decade fighting to remove Planned Parenthood from any state-funded programs. By 2014, 82 family planning clinics in Texas had shuttered, and only a third were from Planned Parenthood.


People with commercial insurance can access birth control and other services through abortion providers like Planned Parenthood and Whole Woman’s Health if they are in their insurer’s network, White said. People can also opt to pay out of pocket and some providers may have philanthropic support to serve people who can’t afford to pay, she said.


Through the Planned Parenthood Direct mobile app, people can also order birth control and emergency contraception. But for those 17 and younger, it would require parental consent in Texas, White said.


How can I get emergency contraception?


Plan B, which can prevent pregnancy after unprotected sex if taken within 72 hours, is available for anyone to buy over the counter. Pricing can range from about $17 to $50 without insurance, depending on the brand and pharmacy. It must be prescribed by a doctor for it to be covered by insurance. Emergency contraception, including Plan B, may also be available through places that receive Title X funding such as clinics and local public health departments, White said.


Ella, another emergency contraception pill that works up to five days after sex, requires a prescription, but it can also be prescribed and ordered online through an online pharmacy, according to the online resource Bedsider, which is informed by medical professionals. This option is also more effective than Plan B for people over 165 pounds.

What are the options for vasectomies and tubal ligation?

Permanent forms of birth control like vasectomies for men and tubal ligation for women, which is also known as getting one’s “tubes tied,” can be options under Title X clinics and Texas’ Family Planning Program, but they can be harder to obtain because they may require specialists outside of a clinic and some providers may not take lower reimbursements from government programs, White said.

“So it can be difficult for health care providers to work with an outside agency like an ambulatory surgical center or hospital to pay for that procedure,” she said.

Some commercial insurers may cover only part of the cost for a vasectomy or require patients to first pay a deductible, White added.

Are there any other resources?

The nonprofit Jane’s Due Process has guides to teen access to birth control and runs a hotline that teens can call if they run into issues navigating clinics and providers. You can call or text (866) 999-5263. The nonprofit also has a list of organizations that provide free emergency contraception in Texas.

NPR’s Life Kit podcast has episodes and online guides on finding the right birth control for you, how to know when you’re ready to have kids and on navigating reproductive health care after the reversal of Roe v. Wade.

Disclosure: Planned Parenthood and University of Texas at Austin have been financial supporters of The Texas Tribune, a nonprofit, nonpartisan news organization that is funded in part by donations from members, foundations and corporate sponsors. Financial supporters play no role in the Tribune's journalism. Find a complete list of them here.