One of Ukraine's ambassadors invited the Tesla founder to 'f—k off' over his suggestion to placate the Russian aggressors. 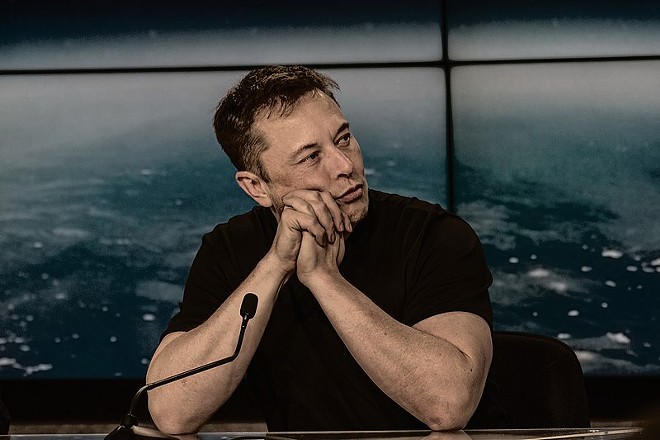 WIkimedia Commons / Daniel Oberhaus
Elon Musk appears at a press conference following one of his company SpaceX's launches.
Texas tech bro and font of Twitter opinions Elon Musk stepped into a steaming pile Monday when he shared his proposed solution for ending the Russia-Ukraine conflict.

Here's the short version: Let Russia take a bunch of land it claimed in its bloody and unprovoked invasion (so long as the United Nations gets to supervise referendums by the annexed territories).

Oh, yeah, also: “Crimea formally part of Russia [sic], as it has been since 1783 (until Khrushchev’s mistake).”

- Redo elections of annexed regions under UN supervision. Russia leaves if that is will of the people.

- Crimea formally part of Russia, as it has been since 1783 (until Khrushchev’s mistake).

The resulting shitstorm drew in Ukrainian President Volodymyr Zelensky, several of the country's diplomats, some U.S. politicos and, naturally, plenty of regular Ukrainians and U.S. residents. In the final tally, 59.1% respondents gave a thumbs down to the idea in a poll Musk attached to his 40-someodd-word peace plan.

In addition to the idea that the world should placate Russia over its aggression, much of the anger stems from Musk's understanding of Crimea's history. Put mildly, his take regurgitates "a selective version of the history of the Crimean Peninsula, one that closely aligns with the Kremlin’s," the Washington Post points out.

In case anyone needs a refresher, the billionaire's take ignores the fact that under oligarch Vladimir Putin, Russia ignored a 1994 treaty under which Moscow agreed to respect Ukraine’s territorial integrity, including Crimea, by annexing the peninsula two decades later.

Andrij Melnyk, the Ukrainian ambassador to Germany, set aside his diplomatic skills for a succinct response to Musk's scheme: "Fuck off is my very diplomatic reply to you @elonmusk."


Fuck off is my very diplomatic reply to you @elonmusk

Several other respondents suggested that by Musk's ass-backward logic, the U.S. should then give up some or all of its territory. Because, you know, that shit also belonged to someone else once upon a time.


Fair enough. Question: Should we give US control back to the Native American Indians? I have both European and Native American ancestry, so I’m good either way; just wondering what you think.

I really don't understand you trying to normalize the violent annexation of another country's land and people. What if Mexico tried this with Texas. Would you be fine just holding a vote?

Others, including  U.S. Rep. Adam Kenzinger, R-Illinois, pointed out the absurdity of Musk thinking his four tweeted talking points could actually solve a conflict as deep-rooted as the one playing out now in Central Asia.


This idea reminds me of fourth grade social studies where we came up with a peace plan between USSR and USA. We thought that if Gorbachev and Reagan were forced to eat one dinner of American food and 1 of Russian, they would become friends. For reals.

We'll let you guess which option is ahead in that poll.