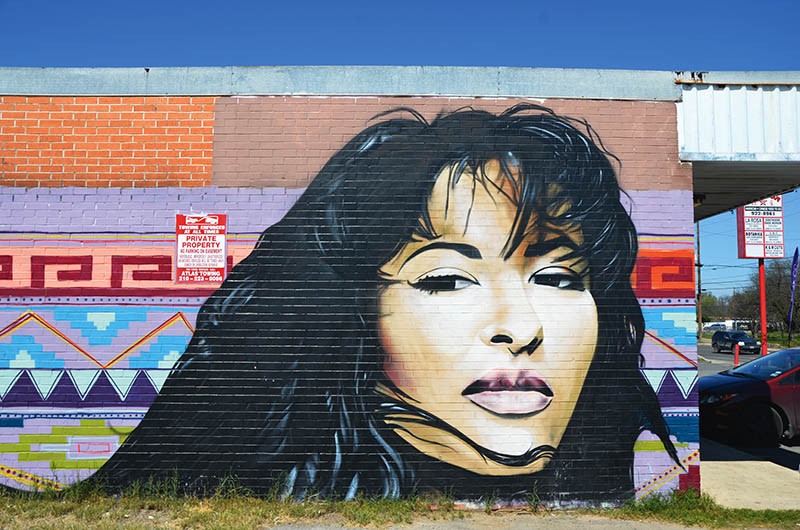 Matt Stieb
Chris Montoya's mural on South Flores Street is a vivid reminder of how much SA still loves the Tejano music diva.

If there's an award for creating and defending a wholesome, money-making brand, the Quintanilla family deserves a lifetime achievement award. Selena's father, Abraham Quintanilla, Jr., set the tone for his family's career in music, billing the family band name Selena y Los Dinos as an anodyne but electric form of entertainment. Skeptical of the now-iconic bustier, Abraham guarded his family from over-sexing, bad press and public shame. In his daughter, Abraham found a conduit for his family's success and a shining example of morality. The one "scandal" that befell Selena was her elopement with her band guitarist, Chris Pérez — a non-controversy if there ever was one.

But with a bullet in room 158 of a Corpus Christi Days Inn, a young life and still-rising career suddenly ended. On March 31, 1995, over a dispute about embezzlement, San Antonio native and Selena Fan Club president Yolanda Saldívar shot Selena in her right shoulder, severing an artery that would cause her to bleed to death. She was just 23.

"What we didn't want to happen was to have a misrepresentation of a great artist like Selena and a family member and a family and a culture," said A.B. Quintanilla, in the documentary The Making of Selena: 10 Years Later. "It kinda forced the family to make a hard decision, which was making the movie."

After saying no to a flurry of producers, they found a friend in Moctesuma Esparza, an activist responsible for the 1968 Chicano Blowout in Los Angeles and producer of Gettysburg and PBS' Villa Alegre. By August 1995, just five months after her death, Gregory Nava (El Norte) was announced as director for Selena."The pain and the loss and the grief was palpable," Esparza told the San Antonio Current. "And we were sensitive to that. From that point of view, it was a constant remembering that there were real people who were here who suffered tremendously and had real pain that we needed to respect and honor."

Filming began for Selena a year later, with then-unknown Jennifer Lopez as adult Selena and a young girl from Harlingen, Rebecca Lee Meza, as the childhood singer, picked at a casting call in San Antonio.

"I did some research and had the idea that what was possible was to make a movie about an American family that was seeking the American dream," said Esparza. "And was devoted and committed and worked together and managed to achieve that success."

The movie takes a long retrospective look at Selena's life, the type of macroscopic biopic that is now out of vogue. Beginning with Abraham Quintanilla's teenage music career flickering out at Lerma's on the West Side, Gregory Nava walks the audience through Selena's childhood and meteoric rise, ending on a montage of loss set to "Dreaming of You."

One poignant scene sparked the enduring catchphrase of Selena culture. After the family's tour bus gets stuck in a ditch, a pair of cholo stereotypes pitch in to help, bashfully offering "Anything for Selenas!" Aside from rocketing Jennifer Lopez to stardom, those three words may be the most memorable impact of this movie on Selena's life.

By establishing the narrative to the tune of $60 million at the box office, Selena widely cemented the legacy of the Tejana icon.