Avid food lovers may be interested in investigating the historical basis for Carriqui's South Texas-centric menu. 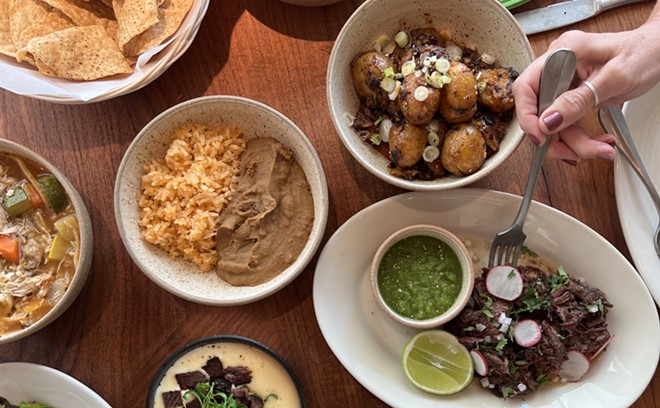 Nina Rangel
Carriqui is housed in the relocated and remodeled building that served as Liberty Bar's original location.

Fans of the original Liberty Bar were like an eclectic family sired equally by the building with its notoriously sloping floors and its eccentric culinary muse, the late Drew Allen.

Allen's own muses spanned the spectrum from county-fair quality cakes to Mexican classics such as a rigorously correct chile relleno en nogada. Traces of his inspiration remain on the menu at the relocated restaurant in King William.

Attempts to revive the Liberty's original space after its departure never really took hold. The ghost, apparently, was gone. Many old-timers viewed with suspicion the prospect of relocating the building, the historic Boehler's Garden, into the Pearl's orbit.

The structure, restored to within an inch of a life it never knew, is now part of a mini compound of its own called Carriqui. From a nostalgic and historic point of view, all the architectural spit and polish, handsome as it may be, suggests that some trepidation wasn't without merit. Best to just get over it.

Ardent birdwatchers may be acquainted with the South Texas native green jay for which the newish restaurant is named. The rest of us not so much.

Avid food lovers may be more interested in investigating the historical basis for Carriqui's South Texas-centric menu, and they might as well start at the most basic level: its Old School Nachos, a borderland creation that made its way north only to be remodeled beyond recognition — much as the building itself. The plate is nothing more than tortilla chips, refried beans, yellow cheese and pickled jalapeño, each nacho individually assembled into a monkishly spare serving. Try it for old time's sake.

More innovative, but also less successful, is Carriqui's tuna tostada. The dish was welcome in its simplicity but drenched in a sauce that spoke more of something soy than the expected citrus and habanero.

Mexican terminology is all over the South Texas map at Carriqui. But oddly the menu turns to French for what is in effect a grilled flank, or flank-adjacent, steak. At $40, it's called a bavette, a cut close to one customarily found on a less-lofty platter of fajitas. That quibble aside, it's a beautifully rendered piece of meat, tender, flavorful and nicely mated to accompanying bitter greens.

At the other end of the price spectrum, is the restaurant's beer-braised barbacoa. Made these days from beef cheeks, the age-old practice of wrapping a beef head in burlap or maguey leaves and burying it in a pit prepared with mesquite coals having long been abandoned, the dish usually lacks the earthy, fatty funk of the original. But even if this rendition is more like baby's first barbacoa, it's worth attention — especially since it comes with proper "Spanish" rice and decent refried beans.

The urge to tinker is never far below the surface at Carriqui, however. Barbecued cabrito, served with briskly pickled red onion, is presented on a banana leaf with a full-bodied Texas pecan mole that somehow manages to dominate even usually indomitable goat.

Meanwhile, fish a la plancha — presumably from the Texas Gulf — took an opposite tack. It was perfectly cooked but utterly bland. Maybe the missing crispy garlic might have helped. Its cilantro rice, though, was impeccable. The kitchen can do rice.

All would be forgiven if Carriqui would take it upon itself to do a rip-roaring chili, a dish for which San Antonio was once famous. But barring that, brisket will have to do.

My first experience at Carriqui with this Central Texas staple was as a component of the From the Pit botana platter. Along with the achiote chicken, the brisket failed to justify the apparent investment in the restaurant's impressive battery of barbecue pits.

But a return visit for lunch-special brisket tacos suggests that the pit wranglers have mastered the operation. The coarsely chopped bits sported a good bark and an appealing, smoky flavor bolstered by no-holds-barred pico de gallo and tart jalapeño salsa.

Equally assertive, the Carriqui Salad — a mountain of varied lettuces with shaved jicama, radishes, cucumbers and cherry tomatoes — is enthusiastically bathed in a dazzlingly bright dressing and strewn with tangy, dried hibiscus blossoms.

Among the Texas-tinged cocktails, the tequila-mezcal Curandero is a standout, in part because of its use of those same, dried hibiscus flowers. The dessert menu offers a pecan pie that avoids the trap of treacle-y sweetness, and a delicate tres leches cake does for goat's milk what the barbecued cabrito did for goat meat: makes it disarmingly mild.

Not everything in Texas needs to be bigger than life, apparently.

The skinny: Housed in the relocated and much-remodeled building that served as Liberty Bar's original location, Carriqui is named for a bird most of us don't know and features South Texas cuisine most of us do. Like the building, the cuisine also underwent changes, although with some exceptions. Classics such as brisket are perhaps best left to the traditional practitioners, but in the undeniably handsome setting, plates such as barbacoa and barbecued goat seem sufficiently at home. Salads are excellent, lightened versions of classic desserts work well and cocktails are just good enough.