The restaurant's tasting menu changes its regional inspiration every quarter. 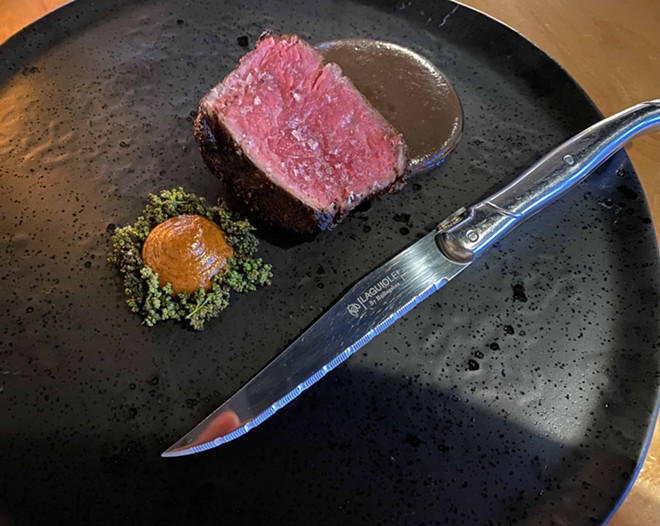 Ron Bechtol
Mixtli has dubbed the current iteration of its menu "500 Years of Mexico City."

Mexican cuisine lost a lioness in late July when Diana Kennedy died at her remote ranchito in the state of Michoacán.

The tart-tongued scholar and cookbook author almost singlehandedly elevated the country's cooking into the realm of the world's greats through her meticulous recording of recipes gleaned during sometimes arduous travels. Her approach was almost archaeological: once on paper, recipes became sacred writ, admitting of little change.

Rico Torres and Diego Galicia, owners of San Antonio's Mixtli, are equally fascinated by Mexico's regional cuisines, but their approach could hardly be more different.

Mixtli means "cloud" in the native Nahuatl language, which seems appropriate. Like a cloud, the restaurant appears to float above its country of inspiration, pausing to reflect on the foods and folkways below. A traditional recipe might become a springboard to something entirely new. Respect resides not in strict adherence to custom but in the honesty of Torres and Galicia's approach to place and product.

The restaurant's tasting menu, which changes its regional inspiration every quarter, is currently paused over Ciudad de México, one of the globe's great metropolises. Mixtli has dubbed this iteration "500 Years of Mexico City," and it's a lot for anyone to ingest in 10 courses.

Fortunately, the experience begins modestly with bread and butter. That service will be your first introduction to the kind of kitchen Mixtli runs — predominately female and entirely passionate, a fact that becomes apparent as plates are presented and described by the people who cook them.

There may be nothing exceptional about the house-made bread, but it's the occasion of a discourse on the introduction of wheat into Mexico by the Spanish. The butter wouldn't have existed at the time of the conquest, but it's rendered unique here in its melding with smoky chile seeds, and the wick-warmed duck fat provided to pour over it all is the perfectly logical extension of the watery realm that was Tenochtitlan prior to Cortez.

To continue, the dish La Gran Tenochtitlan (or "Jewel on the Lake") also evokes the body of water on which the Aztec capital was situated. It features spirulina, an aquamarine liquid stand-in for an algae-like "froth," which once was harvested from its shores. We also first encounter all-important corn here with a round of sweet potato and a chiffonade of romaine. The creation is tartly refreshing and an artful blend of ancient and new.

Crab and crunchy trout roe continue the water-dwelling theme in the Xochimilco course, expressing both the waters and the chinampas, or floating gardens, that have been called the "last living link of the Aztec civilization." Thin, chile-flecked coins of squash encircle the crab and roe, calling to mind earth-bound milpas, or multi-crop cornfields, that endure to this day.

The Tomatl course, we're told, refers back to the tiny tomatoes that were the precursor to today's county-fair behemoths. They're moistened with fermented tomato water, capped with a contemporary buttermilk sorbet and paired with a crisp blue corn taquito stuffed with smoky mashed avocado and edged with a ruff of fleshy purslane leaves. Together, the ingredients add up to a profound experience.

My first disappointment came with the course called Mixiote. The wrapped packet is historically bound up in a translucent membrane extracted from maguey leaves and can be made with any main ingredient from rabbit to fish. Since it's difficult — sometimes even illegal — to source, cooks commonly substitute parchment paper or banana leaves. Mixtli's filling, while presented on paper, appeared to have been cooked entirely apart from its envelope. The combination of redfish, rajas de poblano and braised greens, all doused in a masa-thickened chileatole, was appealing on its own, yet it felt like a missed opportunity.

If you choose to add the evening's wine pairing option ($60), you'll find bottles from as far away as Slovenia, but none from Mexico — a shame given the country's recent advances. Nevertheless, the options are generally good and sometimes almost outshone the food.

That was the case with the pork al pastor, its Lebanese roots noted, but its execution no more elevated than any of many such tacos around town. A previous offering involving a tart-sweet xoconostle, or cactus fruit, offered a glimpse into Mexico's Spanish Baroque heritage with its stuffing of dried fruits and nuts and a mole of the same fruit with güero chiles. It couldn't be duplicated elsewhere.

Perhaps in a nod to the current-day Mexico City, a beef dish featuring cacao and coffee-crusted tenderloin was the last savory course. The beef was beautifully done, but the dish's most exceptional aspect was a flanking purée of fermented garlic and black bean and a halo of huazontle — sometimes called Aztec broccoli — surrounding a purée of chicatanas, or flying ants. Prized by the Aztecs, the ants are still harvested today, and they perfectly embody Mexico City's more-than-500-year history.

Mixtli brilliantly evoked the millennial gods of corn and cacao in the dessert presentation, in which a pastel de elote, mango, chocolate and pomegranate all played a part.

Should you choose to undertake this dining journey, a shot of mezcal from the adjacent bar seems appropriate as a toast to your completion of such a comprehensive course in culinary history.

Prices: Tasting menu, available by ticketed reservation only, runs $160 plus fees, taxes and tip. Wine pairing is an additional $60.

The skinny: Mixtli is devoted to the varied cuisines of Mexico, presented in a regionally or thematically focused tasting menu that changes quarterly. Traditional recipes serve as springboards for contemporary interpretations, sometimes utilizing ancient ingredients such as flying ants. The current "500 Years of Mexico City" theme lasts until September 24.