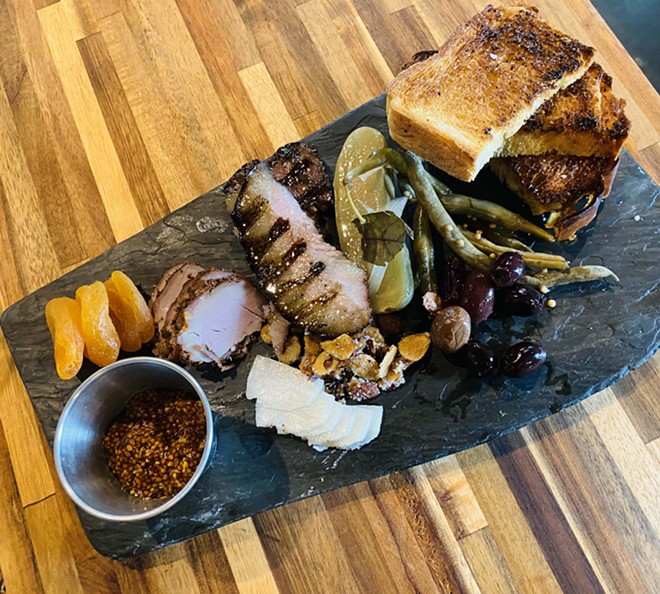 Ron Bechtol
The menu's Small Plates category isn't headed by the charcuterie board, but it might as well be.

Editor's Note: Days after the completion of this review, Five Points Food & Drink announced its closure.

The building at 1017 N. Flores that until recently housed gluten-free dining haven Five Points Local has a varied food service history that also included a vegetarian restaurant whose chef and owner lived on the floor above.

It's long been — and still is — a challenging hodgepodge.

But the structure isn't without charms that could be exploited by a dedicated owner and fixer upper. Such was apparently the attraction for chef Michael Sohocki, who recently moved his well-regarded downtown restaurants, Gwendolyn and Kimura, into the quirky space and even took advantage of the upstairs for a standalone bar.

The place is still a work in progress. Though Sohocki didn't indicate that any changes were afoot for Kimura and its ramen format, he did suggest that he was reconsidering the decision to keep the Five Points name for the business' "European" aspect.

"It's too confusing" he admitted, adding that the Gwendolyn moniker might come back with a "bistro" tag.

Based on the new menu, it appears Sohocki has jettisoned that restaurant's ethos of sourcing ingredients from a limited local radius and eschewing electric appliances in the kitchen as part of the move. However, the casual diner is unlikely to notice the change.

The menu's Small Plates category isn't headed by the charcuterie board, but it might as well be. Sohocki has always had a strong charc game, and this iteration is no exception. A smoky lomo, a crisply grilled slab of guanciale and some gossamer coins of lardo — the apotheosis of cured pork fat — form the slate slab's backbone. Snappy house pickles and "apple pie-spiced" almonds provide taste and textural contrast.

The so-called "Falafel with Love" seemed like a sideways step in a list that includes escargots and classic beef tartare, but, if the falafel is actually "given the care and attention it deserves," as the menu boasts, why not? After trying them, maybe not. The fried orbs of ground chickpeas were a tad too crunchy for this taster. Ravioli with sage brown butter slipped back into sync and were, if a touch chewy around the edges, a beautiful rendering of the traditional northern Italian pairing of butternut squash and sage.

At three or four, the entrée list is short, and at first glance, disappointingly unambitious given Sohocki's aspirations at Gwendolyn. It seems there's usually steak — on one menu it was New York strip, on another a filet mignon — and an obligatory burger.

The seared market fish proved to be a skillful and crisp-skinned mackerel, a variety of fish that can come across as oily and assertive in other hands. An equally impressive risotto served as its pillow — unabashedly cheesy, bright with lingering whispers of white wine and cooked to that perfect point where there's just a hint of resistance. I'm happy to say the kitchen gave the dish the attention it deserved.

And the same held true of the breaded pork schnitzel, not normally an entrée to excite either intellect or libido. But if pounded pork can be sexy, a condition that was aided and abetted by its plate mate of mousseline potatoes bolstered with "a disturbing amount of butter," this is its opportunity. I'd only be tempted to add an even stronger shot of heat to the Dijon cream that pooled in the plate like the accompaniment to an upscale chicken fried steak.

Desserts are also few, and if you've been cautious about consuming alarming amounts of butter, feel free to go for a gâteau with white chocolate mousse or its current variation. House-made icecream seemed a better course of action in our case. The restaurant offers four flavors, each with its own unique point of view. Spiced peach won by a whisker.

Wines aren't a feature of the drinks presented at the table, a disappointment to those wanting to extend the European aspect of the "fancy-casual" experience.

However, there's a selection of beers and sakes, along with a couple of ciders. Give the draft Texas Keeper a try. You could certainly order a cocktail, too, but why not head upstairs to Dash Bar before or after — or as a sole destination for that matter. It's especially pleasant during the 4-7 p.m. happy hour.

Reflective of the multi-talented team Sohocki has assembled, our server one lunch was the bar's stirrer and shaker on a following day, and he turned out creditable cocktails. The Crazy 88 is a riff on the classic, bubbly French 75, unique in its addition of a floral matcha tea syrup. The icy and fruity Butterfly Rumble features rum, blackberries and butterfly pea flower, an extract that enhances the drink's purple hue.

The skinny: Lauded local chef Michael Sohocki has moved his sibling flagship restaurants, Restaurant Gwendolyn and Kimura Ramen, out of downtown to a quirky building on North Flores Street, where he added an upstairs bar. The menu at Five Points Food & Drink is more casual and far less polemical than Gwendolyn's. There are only three or four entrées, though an ample list of small plates compensates. The crew's kitchen skills haven't diminished with the move, lifting dishes such as pork schnitzel out of the ordinary and into more elevated realms.